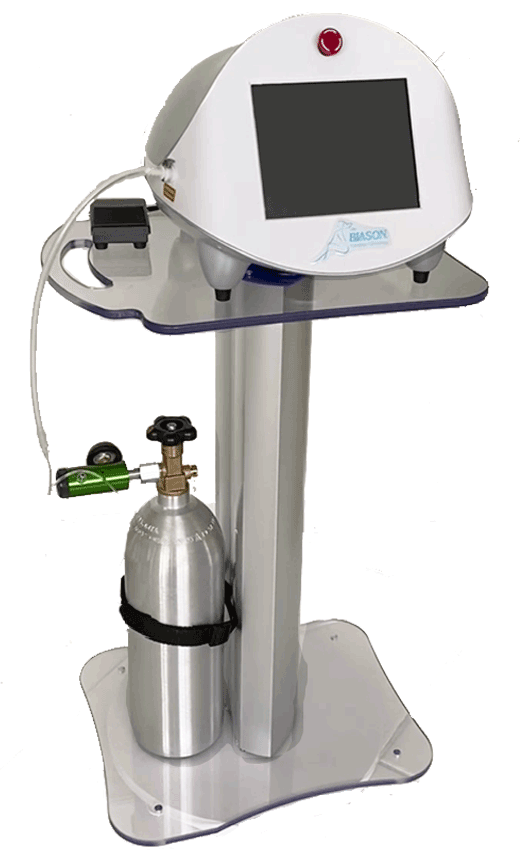 Carboxytherapy is a non-surgery method that consists of the therapeutic use of carbon dioxide gas by subcutaneous administration.

It is a safe, minimally invasive clinically proven method to rejuvenate, restore, and recondition the skin and treat wrinkles, laxity, cellulite, and stretch marks
Consists of the therapeutic use of carbon dioxide gas by subcutaneous administration.
.
Carboxytherapy employs transdermal application to infuse a tiny amount of gaseous carbon dioxide (CO2) below the skin into the subcutaneous tissue through a needle or skin, breaking down fatty deposits and stimulating collagen production.
It also can stimulate local metabolism, toxin elimination, and activate the lipolysis process.
The treatment has no downtime and a single session can take between fifteen minutes and an hour. In short, Carboxytherapy is a simple and safe procedure for beautiful, younger-looking skin.

*Carboxytherapy introduced into the stretch marks improves the collagen content and shrinks the stretchmark’s, improving the appearance.

*For cellulite reduction, Carboxytherapy is introduced deep alongside the lymphatic system of the upper and lower leg to improve lymphatic drainage and circulation.
*For resistant fat reduction, Carboxytherapy at high volume is introduced deep into the fat which then breaks up the fat cell and stimulates new vessels and rejuvenation.
What areas of the body can be treated with carboxytherapy?
Carboxytherapy can be used to treat the eyelids, face, neck, arms, stomach, buttocks, and legs.
What other benefits occur from carboxytherapy?
In addition to increasing oxygenated blood-flow to the region injected, carboxytherapy also increases collagen formation in the skin, giving it a more youthful appearance.
How does carboxytherapy work for dark undereye circles?
One major cause of dark under-eye circles is vascular pooling. The capillary network of the lower eyelids can become congested for a variety of reasons. Normally, the tears drain from the eyelids into the nose, but if there is some obstruction due to chronic nasal congestion from seasonal allergies, previous nasal fracture, or a deviated septum, the drainage doesn’t function well, and the blood flow to the lower eyelids becomes sluggish, giving rise to the boggy blue tinge known casually as “allergic shiners.” The lack of appropriate oxygenation to the lower eyelid skin allows the bluish cast to show through the thin skin of the eyelids. Carboxytherapy works to improve the capillary network of the lower eyelids, as well as to increase the dermal collagen layer in the lower eyelid skin. By injecting a small amount of carbon dioxide gas into the affected areas, blood flow is increased and improved capillary networks are formed for longer lasting circulatory benefit. The bluish cast is replaced with a healthy pink tone. Once a series of treatments is completed, the skin has a more luminous appearance that lasts approximately six months.
How does carboxytherapy work for stretch marks?
Stretchmarks (striae distensae) occur when the skin is stretched to the point where the dermal collagen ruptures. Carboxytherapy causes the formation of new collagen and subsequently thickens the skin to improve the appearance of the stretch marks by rebuilding the collagen matrix.
How does carboxytherapy work for cellulite and fat reduction?
When injected via a specific technique, carbon dioxide gas is directly toxic to fat cells. The fat cells literally burst and are eliminated by the body.
Some results:

Back to: Carboxy Heating System